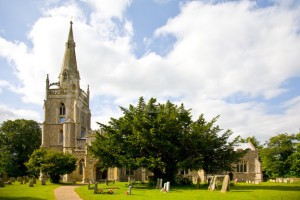 Welcome to the web site of the Church of the Blessed Virgin Mary.

This beautiful church has been the home to a worshipping Christian community nearly a 1,000 years and has welcomed visitors for all that time.

Your chance to ask the questions that have been on your mind.

There will be wine and nibbles and we suggest a donation of £5:00 to cover costs.

See you there with your questions.

The first draft of the letter that I wrote yesterday is different, although on the same theme, to the one I write today.

Yesterday I was writing, with thankfulness, that the restoration work on St. Mary’s, Woolpit, will be able to start very soon, due to the hard work of those in the church who have sourced grants to pay for the work.

Then last night we saw the dramatic pictures of Notre Dame Cathedral in flames and much of that beautiful building being destroyed. Today, some of the images taken by the fire crews from the interior, do give hope that not everything has been obliterated although much will have been severely damaged, both by heat and by water.

Fire occurring during the restoration of historic buildings is a constant concern and in Britain we’ve seen it happen on many occasions – the most recent being the Glasgow School of Art. Yet, all historic buildings need restoration and it has to be an on going process. Which takes me back to our lovely church of All Saints.

Although St. Mary’s doesn’t have stunning glass like that in the Notre Dame cathedral it does have some very old glass in many of the windows – glass that is tinged with green – and these windows are in a poor state. So is much of the stonework around the windows. The restoration that is needed isn’t dramatic but is essential if we are to keep the church water tight, protect the stone work and ensure that we pass on to the next generation our lovely village church. With such work come risks, although lower in the case of St. Mary’s where none of the work is within the roof or ceiling this time, risks that we and our building contractors are very aware of.

As the fire in Notre Dame has re taught the world, our sacred spaces are precious in our lives. To those of us who worship in them, their peace is the product of hundreds of years of prayer. However, they also provide sanctuary and places of quiet to those who may not have Christian faith but do value the importance of sacred spaces.

Our churches are symbols of continuity and stability in a world where so much seems disposable and make shift. They remind us of a different dimension to our lives. St. Mary’s church is open to all who want to stop, to be still and to enjoy the silence. It is there for those who want to encounter God afresh or for those who need a break from busy lives or a brisk walk.

Notre Dame will be rebuilt – a symbol of our resurrection faith – while St. Mary’s will be restored (thanks to the hard work of our fund raisers) and that too is a symbol of God’s love, which is eternal and renewed for each of us.

One of the earliest recorded April Fools’ hoaxes in England  took place in 1689 when several people were tricked into going to the Tower of London to see the lions being washed. That was the beginning of a long tradition of hoaxes and practical jokes on the day to catch out people and make them an ‘April Fool’.  The more recent hoaxes have been on the TV or through the internet – the story of spaghetti farmers showing pictures of bushes with spaghetti growing on them caused a rush of people wanting to purchase bushes of their own – means that on April 1st there is a tendency to question any news item that appears. Is it an April Fools’ joke?

This year Easter day falls on the 1st April. Christians believe that Easter day celebrates the news that Jesus, crucified in a brutal and public way, rose from the dead and was seen alive, over the next few weeks, by countless people. Jesus, son of God, conquered death and gave us all hope.

On the day when many parts of the world celebrate April Fools’ Day we are made to reflect on the writing of St. Paul to the young church in Corinth. The people of Corinth prided themselves on their wisdom. They weren’t willing to believe that an almighty God could allow his Son to die a shameful death on a cross – the victim of Roman brutality. They considered the teaching of Paul and other Christians as total foolishness. Paul understood this. He wrote in his first letter to them:

‘We proclaim Christ crucified, a stumbling block to Jews and foolishness to Gentiles, but to those who are called, both Jews and Greeks, Christ is the power of God and the wisdom of God. For God’s foolishness is wiser than human wisdom, and God’s weakness is stronger than human strength.’           1 Corinthians 1: 23 – 25

We believe that God really did send his Son to live a human life and die a shameful death to overcome the power of death. We believe that Jesus rose from the dead, on that first glorious Easter morning and through his conquering of death we have been given eternal life in fullness, richness and abundance.

So this year, on April Fools’ day, we will celebrate God’s great joke over sin and death. We will celebrate his gift to us all – that through his Son Jesus, we know not only God’s foolishness, but his eternal love and grace to us. To those who believe God does not make them April Fools, but makes them heirs to his kingdom and his beloved children.

Fund raising to maintain the medieval church of St. Mary’s is very necessary and often hard work but it can also be great fun.

The recent Burns Night Supper, in January 2018, was a wonderful night with excellent food and very fun entertainment. The talent level in Woolpit is very high. Thank you to everyone who worked so hard to make a great evening. 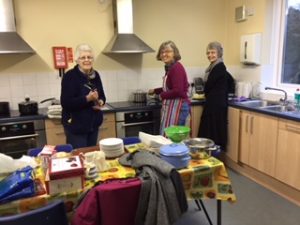 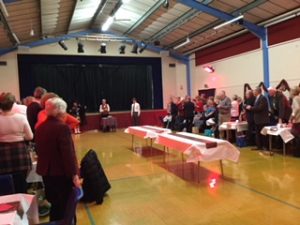 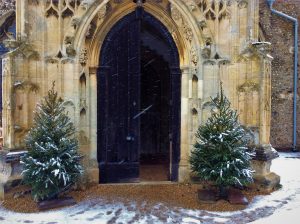 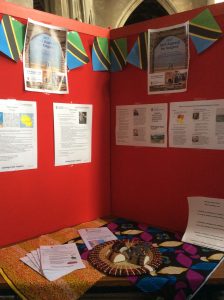 We are getting ready for the service about the Diocese of Kagera, in Tanzania, which takes place on sunday 12th March. Just wish we had the warmth of Kagera but we are truly grateful that we aren’t facing the ongoing drought that has affected that part of Africa. 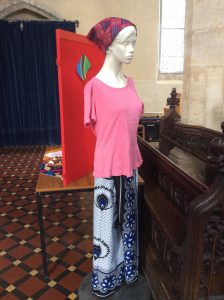 Is this how you wear a kanga?

Some clothes are just not warm enough to wear in St. Mary’s in Spring. come and join us but do wear a little more than a tee shirt and kanga! 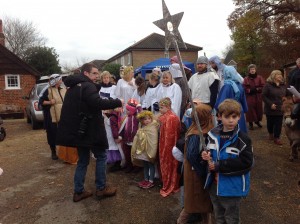 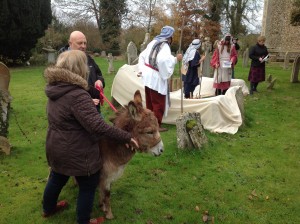 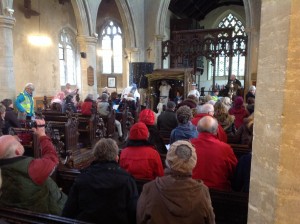 2016 Woolpit to Bethlehem, Walk About Nativity.

a lovely cast of characters – from the evil Herod to the arch angel Gabriel and of course, the special baby with his parents Mary and Joseph brought the story of the Nativity to life – with the assistance of many children and a donkey called Ember. We celebrated the moment when God revealed himself and his love for us by being incarnated as a baby. 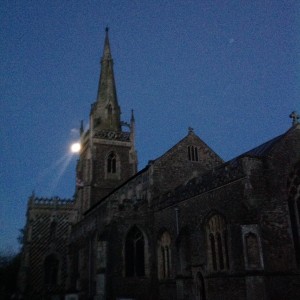 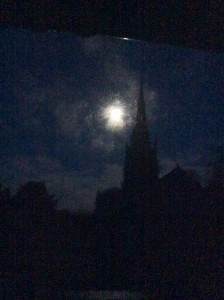